A quacktastic girl (and ducks)-meets-boy romance prequel to the ancient Greek tale of the Odyssey!

Huh? What's that? You don't know what's Iliad and Odyssey?

You don't really need to be familiar with either to play this game.

Also if it wasn't clear enough, yes, there are ducks.

You play as Penelope, the naïve, sheltered, timid daughter of one of the Spartan kings, Prince Icarius.

While staying at her uncle's place, Penelope encounters one of her cousin's supposed suitors, the notorious 'trickster king', Odysseus.

But this Spartan princess is also notorious in her own right...

... As the favorite daughter of the king?

No, not that one.

I mean, as the notorious 'duck girl'. 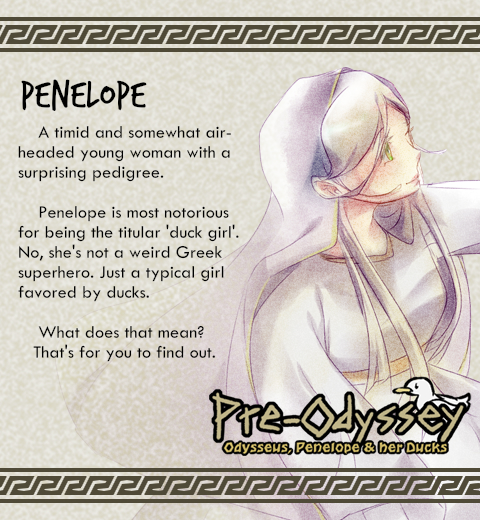 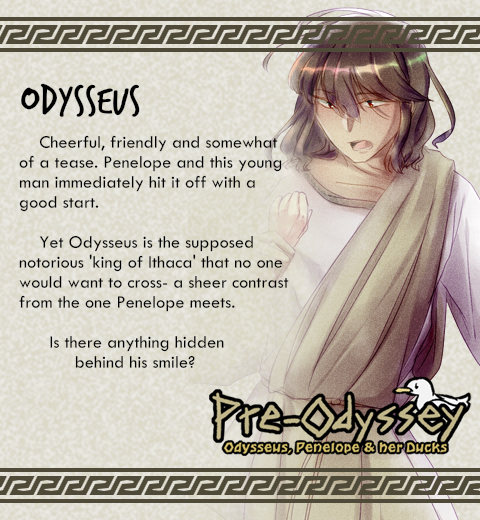 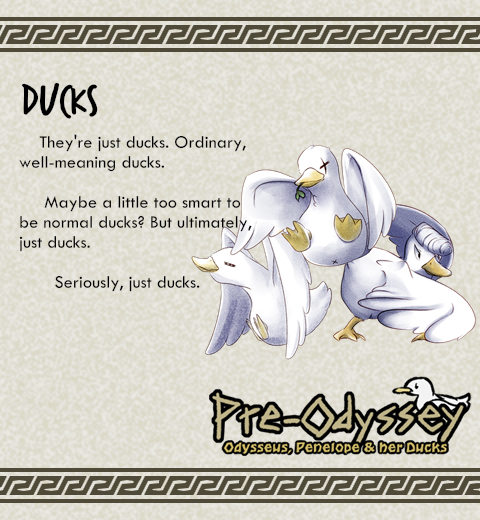 -Romance events can vary depending on choices

*This VN has multiple endings, ranging from romantic endings, to friendship endings, though there are two main endings- one is more on the lighthearted side, and the other is more lore heavy.

lovely game with a sweet storyline and very funny moments. the different endings and illustrations were my favorite part.

loved the reinterpretation of the myth itself, as well as the effort you put into introducing the whole world and characters in an easy-to-digest way for those unfamiliar with Greek mythology. this game made me see Odyssey in another way hahaha! i always thought of him as this bearded, long-haired (like the statue representation of him actually) wise and rational slender yet athletic man, but never as a mischievous and troublesome sweet brat.

this game was so fun and cute!! the art was so cute, and the addition of the ducks was such a cute touch! I only got the romance end so far, but I'll definitely do more play throughs for the other ends! love the romance it was so soft and cute, kinda sad to think about the events of the Odyssey but love this game! keep creating awesome art and games!

I'm glad you had fun!
Hope you also enjoy the other endings. If you have trouble finding them, there's a rough walkthrough for the main ones in the game file (it's a notepad file) ^_^

I loved this game so much. It has a great story and I just LOVED the artwork. The visuals were amazing. As someone who does art, I cannot imagine how much time went into making all the character sprites. My hand would for sure be dead by the end of it.

I loved the ducks as well! It really brightened the story and added some more humor to it as well! Overall, I really enjoyed the game! little sad there wont be a sequel but I get it ^^

Well, there is a possibility of a sequel (I do love making content for these two), who knows? ;)

Oooo! I'll definitely be on the lookout if there is one in the future!

That was such a sweet story, I'm so glad I played this! I loved it! I was smiling from the beginning to the end. Plus The Odyssey is one of my favorite stories, so it was pretty nice to have a lighthearted and cute story about Penelope and Odysseus. I'll have to check your other games! :)

Your English is fine! I really appreciate that you took the effort to comment ^_^

I'm glad you enjoyed the choices. I wanted this game to have some replayability, so I tried to make the choices have an impact whenever possible. I did worry that the game might end up becoming to difficult, so I snuck in a walkthrough file (for the main endings) in the game folder.

İt's not that hard but I use walkthrough for one ending but I am pretty sure if I try little hard I can found myself. Anyways it's was a beautiful experience for me thankss🥰

Woo, thank you for the adorable story! Pre-odyssey is a charming love story about cute and soft love between a couple that you can experience in 2 hours or more. As I have mentioned, I love the interaction between our protagonists, especially how soft they were. Fluffy fluffy~ Props to the literal wingmen of ducks and their variety of looks! They made everything interesting and third-wheeling the couple, poor Odysseus. Haha for duck puns.

A light-hearted isekai sounds like a great idea, and I would love to see anything with Penelope and Odysseus and the ducks in it. I sure love to see more of that lovey dovey! Ooh, maybe PenelopexOdysseus in modern time would be nice! (I saw that great art nudge nudge wink wink). Anyway, I'll be checking out your future games and what you've made soon!

Thanks for the detailed review ^o^/

I do have a number of AU ideas for them (including Penelope and the Seven Ducks *cough*), but who knows if they'll make it into VN form ;)

Absolutely loved this! I expected to enjoy it since I'm a fan of Greek myth, but was surprised by how invested I got in the love story. The character expressions and reactions are also cute, and the ducks add a layer of humor to the story that was refreshing! So great!

Though, now thinking about the 20 year departure due to the events of Illiad/Odyssey makes me unreasonably sad :(

Yeaah... one of things I kept repeating to myself while writing this was- "who is this woman Odysseus would endure 20 years of ordeals for?" and that was one of the things I wanted to convey to those who are familiar with their myth :)

Ahhh, this was so adorable!  I'm pretty much obsessed with the Trojan War (though as a Patroclos fangirl, I prefer the Iliad to the Odyssey), so of course I had to play it after seeing your posts about it in DevTalk! :D  (Admittedly, it took me a while to get to it, because things are nuts in my life right now, but I guess I just need some ducks in my life to help me out...)  I love the character art, esp. the ducks, and Penelope hiding behind her veil. :)

The bonus scenes in the extras now make me want to see a light-hearted isekai set during the actual war.  (Or maybe I should make one where the isekai'd heroine is too busy squeeing over how lovey-dovey Patroclos and Achilles are to actually bother courting anyone herself...)

Thanks, I hope the ducks indeed helped you out! ;D

the story of penelope and odysseus was very cute. i'm looking forward to your next project ehe

i stan the ducks!!

And the ducks thank you ;D

Thanks! I might release a new one around June-July? (for Otome Jam) But I won't be doing the story. It'll likely be a team project, the same one as Tales of Misteria (another game in my profile; feel free to check it out if you haven't yet ^_^).

Oh my gosh this brought back so many memories from when I read these greek myths at school!!

I love the way you made an otome game out of Odysseus and Penelope's story, it was so cute!! Also, gotta love the ducks 🦆  they were the real MVPs.

The extra that was unlocked at the end was really funny too!!

Awesome game, it was a lot of fun ❤️

The ducks just be doin' all their best!

So cute, kyaaaa~
The world needs more Greek myth-based otome games!
Thank you for this little gem, I sincerely hope you'll keep at it :)

Oh my, the art is good and I like the plot. It was sweet 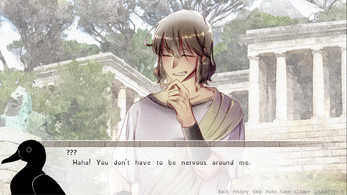 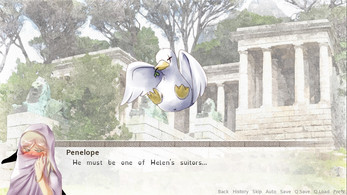